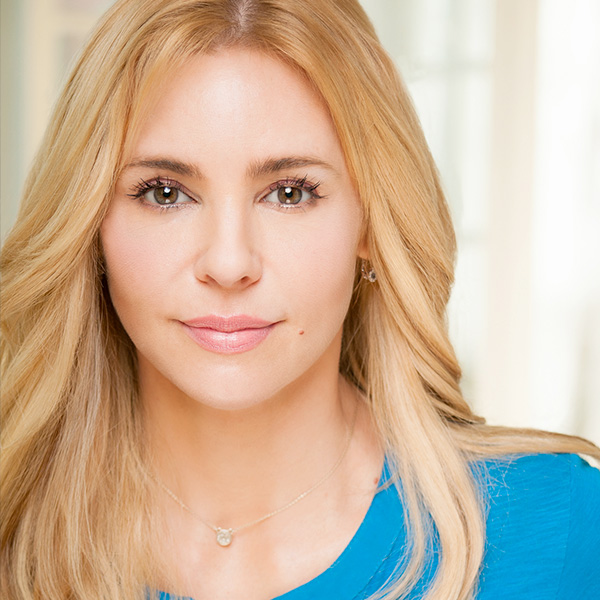 Olivia d’Abo is a triple threat. In a field where career longevity is rare and versatility even rarer, she has seamlessly moved through theatre, television, and music accomplishing success in all.  Further the British born actress continues to gain recognition with her ability to shift from comedy to drama with intelligence and grace.

Olivia’s film debut was in the role of Princess Jehnna in Conan the Destroyer opposite Arnold Schwarzenegger, released in June 1984. Two months later, she appeared in the supporting role of the peasant girl Paloma in Bolero.

From 1988, Olivia was in the main cast of The Wonder Years in the first four seasons. Her character, Karen Arnold, was the hippie sister. In 1992, she guest starred in the Star Trek: The Next Generation episode “True Q” as Amanda Rogers. She is well remembered as the recurring villain Nicole Wallace on the NBC crime-drama Law & Order: Criminal Intent. On the Sci-Fi Channel series Eureka, she had the recurring role of Abby Carter, the ex-wife of Sheriff Jack Carter. She also had a series regular role on The Single Guy and after the pilot was aired, her great reviews and comedic talent got her a development deal for her own show, Olivia Masters Life.

Other recent work includes feature film’s Duty Calls, Unbelievable, Stolen from Suburbia, Presumed Dead in Paradise, and Murder in The First Person.  She can also be seen in two family films RoboDog and A Christmas Eve Miracle, and indie films The Blue Weekend and The Most Peculiar Man directed by Dan Ireland.  Olivia also played Primrose Blackstone, a feminist in the industrial revolution, in period piece The Devil’s Violinist with Joely Richardson and Jared Harris, directed by Bernard Rose and Lucia Rosso an Italian Diva in Impirioso.  Next up she will be seeing in indie features The Blue Weekend, and comedy Unbelievable.

Recent TV work includes showy guest star role on Code Black and coming out soon is Secs and Execs a comedy series written and directed by Stan Zimmerman in which she plays a starring role of Leslie, a ballsy executive, the popular show Psych (USA Network), and Elementary (CBS) playing Nigella Mason. She also starred in European TV series, Jo, playing Madeleine Haynes opposite French star, Jean Reno. Olivia has also starred in a number of movies of the week including Hallmark’s Duty Calls and Inspired to kill.   Next up she can be seen playing the lead role of Sarah in the action thriller The Wrong Son on Lifetime in the US A&E channels in Europe.

Other notable TV and film credits include Wayne’s World 2, The Spirit of ’76, Kicking and Screaming, Greedy, Live Nude Girls, The Last Good Time, Velocity of Gary, The Big Green, and Nuclear Family.  Olivia recurred on Party of Five and Alias opposite Ethan Hawke. On stage, she appeared in the Broadway production of The Odd Couple with Matthew Broderick and Nathan Lane, and later on the West Coast with Jason Alexander and Martin Short, and Entertaining Mr. Sloane at the Actors’ Company Theatre. It received rave reviews and ovation award recognition with her playing the lead role of Kath. She also won the 2012 Broadway World Award for her performance.  Other theater credentials include Scenes from An Execution at the Mark Taper Forum with Frank Langela and Juliet Stevenson, and the Los Angeles Theatre’s critically acclaimed musical, It’s A Girl.

In animation, she is the voices of Melanie Walker/Ten in Batman Beyond, Star Sapphire in Justice League and Morgaine le Fey in Justice League Unlimited; Tak in Invader Zim; Jane Porter in The Legend of Tarzan; Jedi Master Luminara Unduli in Star Wars: The Clone Wars; Carol Ferris in Green Lantern: First Flight; Sonya Blade in Mortal Kombat: Defenders of the Realm; and Natalia Romanoff in Ultimate Avengers and Ultimate Avengers 2: Rise of the Black Panther.  Most recent work was in American Dad. Olivia’s music career is still in full gear- she is currently recording new material and will be performing life in Seattle on June 29th 2018. She also hosts a weekly podcast every Friday.