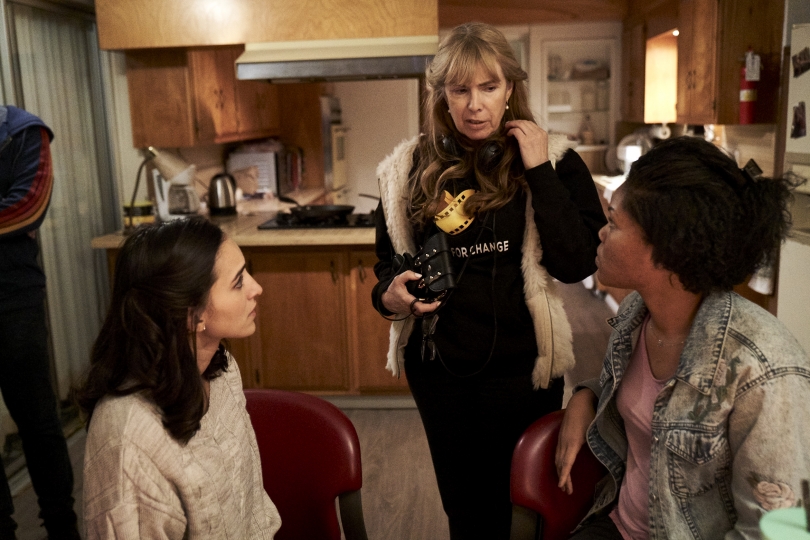 Angie: Lost Girls by Julia Verdin one of our BEST FOR FESTS Label

Angie, an innocent 15 year old, is abducted by traffickers from her hometown. When she is finally rescued, she tries to heal from her trauma while con tending with the continued threat the traffickers pose to her, her family, and her friend still in captivity.

I was inspired to write and direct this story after my experiences volunteering at Children of the Night, a shelter for runaway girls, many of whom had been taken in by pimps and put on the streets.  Many of these girls were 12-15 years old, very vulnerable, and emotionally shut down after the harrowing experiences they had been through.

It was important to me to represent my subject in the most authentic and genuine way, so I did a lot of research whilst working on the screenplay.  This included meeting with various representatives of groups that fight against sex-trafficking such as Kim Biddle of Saving Innocence, Kay Buck of Cast LA, Tina Paulson and Bazzel Baz of A.R.C, John Ryan of The Organization of Missing and Abducted Children, and several trafficking survivors.  I also had Lieutenant Andre Dawson, the former head of the LAPD trafficking division as a script consultant.

As with my previous short film, Lost Girls, I felt it was important to tell the story in a non -exploitive and non-gratuitous way.  I chose not to include any nudity. Some of the horrific things that were done to the girls, though factual, I felt would be too disturbing to put in the film.  I went instead with Hitchcock’s technique of not showing all and leaving it to the audience’s imagination.

I cast with diversity to give a feel of the scope of the problem and worked hard to create strong female leads as I feel strongly that women’s stories need to be told.

In terms of shooting style, my DP and I used a lot of handheld and close ups on characters’ faces to put across the emotional tone of the piece.   We looked for ways of framing shots to show Angie’s isolation, inability to cope and feelings of being utterly overwhelmed by the world.  We did this by often framing her looking smaller in her environment.

My goal as a filmmaker was to use the power of film to spark conversation and encourage debate about the very real problem of trafficking that exists in our society today.  It is a billion dollar industry and my hope is that this film will provide such much needed awareness on this issue.  I hope that those who see this film will learn to be more wary of strangers and too good to be true opportunities.

I hope that this film will start the conversation and debate and encourage us all to report any suspicious activity we see, support organizations working with survivors and generally get active in their communities to take a stance against trafficking.

I hope that this film will also inspire people to believe that no matter what has happened or may happen to you in life, you can always make the choice to triumph over adversity and not let the past define you and have faith that recovery is possible.

I am a great believer in the power of people using their experiences to help others and the power we collectively have to make change. This project has been a labor of love for me and I hope the horror of what traffickers are doing to other humans will speak to you to become an advocate against trafficking.”